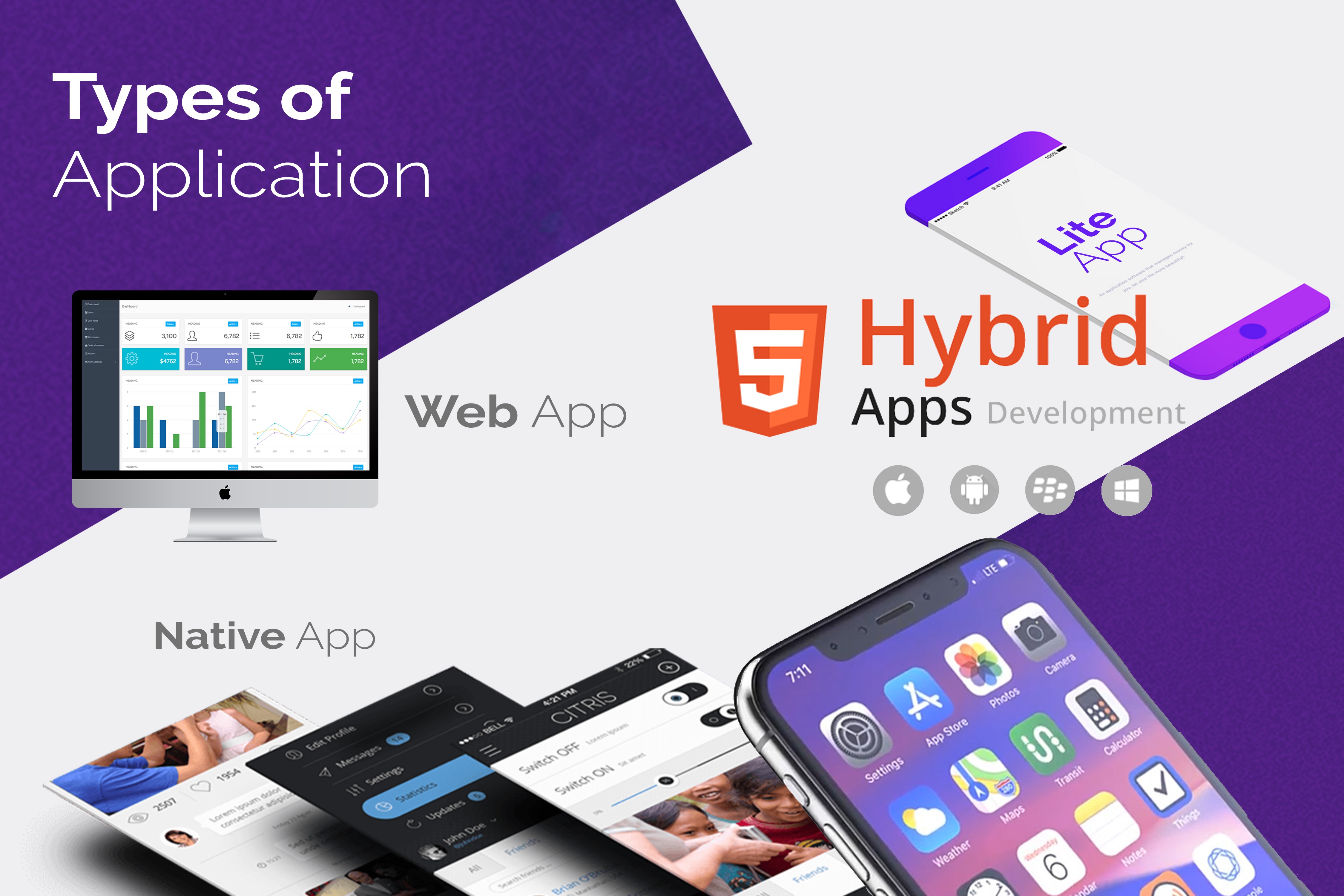 Mobile Apps are an integral part of human lives. There are umpteen apps in the market catering to different needs and audiences. From a user’s perspective, Mobile Apps can be classified into educational, informational, utility, gaming, entertainment, communication, eCommerce, social media and so on. But behind the scenes, there are several types and technologies available in the way apps are developed. Here are some of them:

Native Apps are those apps which are built for the specific operating systems like iOS, Android, Windows, phone etc cannot be used on a platform other than their own. One needs to understand the customer base to identify the OS that majority of audience use and then proceed for further steps. Major software, which is used to develop Native apps, are Objective-C or Swift for iOS, Java, and ADT for Android operating system.

Web apps are not real applications; they are really websites that look and feel like native applications. They run by a browser and typically written in HTML5. These are web apps with responsive design so that they display well on smaller devices as well. These apps can work on different mobile devices and PC web browsers with different operating systems. Web Apps are cross-platform apps and one can access them like a person is accessing normal web pages and such pages can be installed without even occupying much memory.

Hybrid Apps are like any other app which you will find on your phone. These apps can access the phone’s hardware and comes up with responsive design. Users can install it on their device like a native app but it is actually a web app. Such apps are built with a combination of web technologies like HTML, CSS, JavaScript etc along with some native code or you can use industry-standard tools such as PhoneGap, Sencha, and Xamarin.

Cross-platform apps can be developed on multiple platforms using a single code, instead of having to develop the app multiple times using the respective native technologies for each platform. These apps can be customized to work on numerous Operating Systems. React Native or tools such as PhoneGap, Xamarin, Cordova etc. are the technologies currently being used by many developers.

PWS also combines the open standards of the web offered by modern browsers to provide benefits of rich mobile experience.

Lite Applications are the imitate versions of Native Applications. These apps are in extremely small file sizes and make users easily downloadable and are nearly equal in functions of Native Apps. Lite Apps are developed for people with low-end smartphones, low-speed internet connections and take less storage space by means more space can be utilized for storing content like photos, documents, and other files. Some of the common examples of Lite Apps are Facebook Lite, Google Maps Go, Spotify Lite, Opera Mini etc.

For getting a free consultation on Android and iOS app services or wishing to hire a Mobile App Development Company, write to us about your project’s requirements at sales@xeliumtech.com.